It was the late 70’s or early 80’s. (My memory doesn’t serve me well when it comes to dates.) I was a young English teacher and was carpooling with a teacher from the elementary school. Her day ended an hour after the HS, so I had an hour a day to kill before being picked up to go home.

Laird  and one of his friends poked his head in my door late one afternoon.

“We were down in Mr. McCarthy’s office (the principal) a few days ago and we saw two boxes stacked there. They were computers.”

Now, for you younger folks reading this, you have to understand that there was not a single computer in the school district at this time. No labs, no classroom computers, no office computers. There might have been a terminal in the central office that connected to a mainframe for payroll; but maybe not.

“We asked Mr. McCarthy who ordered them and he didn’t know. He said he needed a few days to find out what was going on. We went back today and he said he still doesn’t know who ordered them or who they were for. We asked him if we could open the boxes and set them up somewhere. He said he’d be okay with that, if we had a teacher to supervise us.”

I knew what was coming next.

“Mr. Reilly, would you supervise us? We’d bring them up here after school and set them up and stuff, and leave them in your room. We’ll come after every day and figure out how to use them.”

To be honest, this sounded interesting. I’d never seen a computer other than in magazines.

“Sure, Laird. But you’ll have to leave when my ride comes.”

“No problem, Mr. Reilly. Thanks! Thanks a lot!”

With that Laird and his quiet friend disappeared. Laird was one of the most interesting kids I knew. He was a free thinker, quirky, and really smart. He had shaggy brown hair with bangs cut a little longer than the Beatles. I knew this would be a bit of an adventure. And it was. 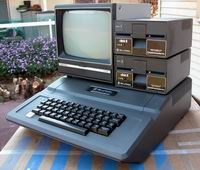 The next day, the two of them showed up and unpacked the two Apple IIe computers. This was the black Bell and Howell model, retrospectively called the “Darth Vader” model. I hovered behind them as they slipped the large computer disks into the disk drives and turned the computer on. The drives made loud grinding noises and I thought they might be breaking the machine; but I kept my mouth shut. Suddenly, on the monitor green words appeared.

Each day they showed up and began to play with the machine. I sat at my desk correcting papers but I was really more interested in what they were doing. They had the Basic programming manual open and were figuring out ways to make the machine “beep” and play music. More Magic!

One day, out of nowhere, they appeared with a game, Asteroids, or something like it, that they had copied. Now, neither of them had a home computer, so I have no idea how they did this. This still baffles me to this day. They called me over to play and I did.

I began to integrate into their world just a bit. They taught me a little about programming in Basic. They showed me what a Word Processor was…another copied version from ‘who knows where’. They took time to make copies of programs for me to keep.

The three of us explored and played…and learned, for the remainder of the year.

Sometime during the next year or two I ordered a couple of more Apples and volunteered to teach programming during one of my prep periods. Whenever I didn’t know how to do something, I’d call on Laird to explain it to me.

It doesn’t seem possible; but I owe my whole career in educational technology to two curious students staying after school… to learn on their own.

A Great Gift for Yourself or the Teacher in Your LIfe!

For Every Caring Teacher 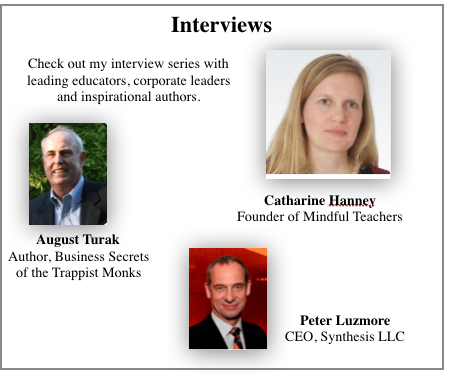 Check Out A Few Popular Posts:

A Teacher's Story
Soft Skills and Mastery
Teaching as a Spiritual Endeaor
A New Focus
The Calling
Tim
The Power of the Spider
One to One Daydream
Laird
The Journey: Step One-Look in the Mirror